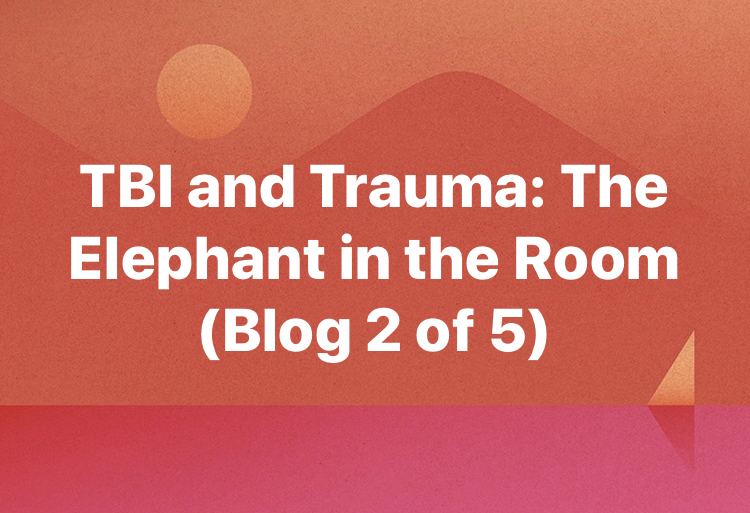 TBI and Trauma: The Elephant in the Room (Blog 2)

This blog is part of a 5 part series about trauma and traumatic brain injuries. It is important to share this information as I have determined that this is a huge part to brain injury recovery. It is said that approximately 10% of TBI survivors don’t recover. Why is that? One solution I’ve learned is that addressing and assessing personal trauma is critical to recovery.

Despite the craziness from this my brothers (Twin 1 and Twin 2) , I have still been supportive and taken the higher road throughout my life. A few months ago, Twin 1 and his wife lost a baby. It was devastating for them and us but as a family, I believe it is important to be there through tough times. Unfortunately, my brother was drinking (as he always is) and was acting belligerent and unstable. Long story short, I had to use the restroom but he wouldn’t let me in the bathroom until he made his point. I went to shut the door and he pushed me. I fell back and hit my head (9th concussion), sprained and bruised my arm. When I got back on my feet, I tried to shut the door but he wouldn’t let me so I pushed him back. It’s time someone gave this bully a taste of his own medicine! Of course, he starts screaming obscenities that I have a brain injury and I’m crazy. Let me understand this – he is physically and mentally abusing me but I’m the “crazy” one? Talk about gaslighting! I’m not even going to pontificate his words, he knows he crossed the line. My father and stepfather verbatim told my mother what happened – exact story I parlayed. Have I been re-traumatized? You bet I have.

Within a few days of my brother hitting me, I ended up in the hospital with hemorrhagic gastritis and intractable, projectile vomiting. My body was clearly shutting down from the trauma. My brother is now calling his attack an “argument” – the BS he and his wife spin, I don’t know how anyone takes either seriously. Classic avoiders, functional alcoholics that don’t take ownership. The ONLY reason I have not filed a restraining order is because he works in a public school and he could lose his job.

Do you see a pattern here? Covering up the abuse and blaming the abused. Sick, right? Well I broke the cycle but my mother had no idea how out of control her sons were until she moved here. She has broken ties with two of her sons which I know devastates her and she’s now having health issues. Being away from family for so long, helped me find my voice and to establish boundaries. When I hit my limit in life, I detached and cut people out of my life for good. It’s the only way I can self preserve. My brother admitted to another brother that he “really crossed the line this time and doubts that Becky (me) will never forgive him.” I will forgive but I will never let him back in my life. As far as I’m concerned, this sibling is DEAD to me (I’m crying as I write this). I am no longer capable of loving him. At 43 years old, he will never change. It’s time he looked himself in the mirror and got honest with himself. Our family has been his rock through thick and thin and still loved him despite the extensive addiction issues, medical issues, lying, borrowing money, and stealing medications from both my father and me (after a surgery).

It’s taken way too long for me to keep hiding this family secret as it’s literally killing me. I didn’t create this dysfunction and cycle of abuse but I’ve done everything in my power to stop it. Clearly, this abuse is above my pay grade. I am working through the trauma with my craniosacral therapist and my therapist but this is the hardest work I’ve had to do. Creating a business plan is a walk in the park in comparison to this situation! Disowning my siblings was the last thing I ever wanted to do but it’s my reality. The time has come to say goodbye.

Stay tuned as the saga continues…